Eurocorps has got a new Chief

HomeNews2017Eurocorps has got a new Chief

7 September 2017 is an important date in the history of Eurocorps. For the 12th time since its creation in 1992, our unique multinational corps based in Strasbourg has got a new Commander; German Lieutenant General Jürgen Weigt takes over from Spanish Lieutenant General Alfredo Ramirez. Like his predecessors, he will be the Commander of Eurocorps (COMEC) for a period of two years. 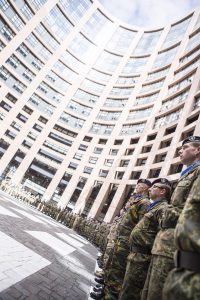 General Ramirez addressed the audience before handing over the pennant to his successor and be officially dismissed of his functions : “I would like to convey to you my emotion upon leaving my Command after two years at the head of our headquarters. My first thoughts go to our soldiers who have been deployed far from their families, I thank them for their personal commitment.
During my mandate, more than 500 staff members have been serving our nations and the European Union in the framework of EU training missions (Mali and Central African Republic) and EU Battlegroup stand-by periods. We are somewhat back to the role model this headquarters was initially intended to meet ; 25 years ago our senior politicians built Eurocorps for the European Defence.
But I would also like to underline the efforts our personnel has made in strengthening their skills in NATO at several occasions such as exercises and preparation for the NATO Response Force stand-by period we will be dealing with in the coming years. We leave to our successors a fully mature tool which is the result of an expert balance between actions for the EU and NATO.”

A change of Command at Eurocorps means that the soldiers coming from the 10 nations have a new Chief, but it also implies that the whole Command Group is changing with a rotation of posts between the different framework nations ; one of the reasons why Eurocorps is so unique…