Although Eurocorps is primarily committed to missions such as Land Component Command for NATO in 2020 or as a force provider for the European Training Mission in Mali and the Central African Republic in 2021/ 22, individual personnel also participate in other missions. It is precisely these complementary missions, as in this case for the enhanced Forward Presence in Lithuania, that open up new perspectives.

On July 3rd 2020, we touched down at KAUNAS Airport, flying in alongside anadvance unitfrom the LYNX operational mission’s French detachment, part of the NATO mission: enhanced Forward Presence Battlegroup Lithuania (eFP BG LTU). I disembarked with my press officer, who headed up the camera team with its photographer and video techs. French detachment’s commander Lieutenant-Colonel PRIGENT, a fellow EUROCORPS soldier, wasgreeted on the tarmac by the eFP’s deputy commander, a Dutchsenior officer. The camera teamwas already busy snapping photos and capturing footage of the French detachment’s arrival as I liaised with the German eFP Public Affairs Office personnel. Let the mission begin! Having scarcely landed, we plunged headfirst into the multinational environment that has been our day-to-day backdropduring the months ahead.
I have been a Public Affairs Officer at EUROCORPS since 2014 after having completed a three-year tour with the Franco-German brigade. I have gained valuable experience dealing with multinational communication operations whichhelped me to hit the ground running inmy new surroundings. The eFP BG LTU operates under German command. My on-site superior wasa German lieutenant-colonel in charge of the Public Affairs Office, staffed by soldiers of 6 nationalities (Belgium, Czech Republic, Germany, Iceland, France, the Netherlands), including 13 military personnel and onecivilian. Therefore, English was the common language in this working environment. During those 3 months, our main task was to manage the communication component of the eFP BG LTU. We were in charge of running the social media pages and coordinating the relations with local media, as well as monitoring media coverage. We also coordinated outreach activities in conjunction with our counterparts at Host Nation Support, as well as the Defense Staff of the Lithuanian Armed Forces and its Ministry of Defense.
Beyond my tasks as theFrench communication officer embedded with the multinational Battlegroup Headquarters based in Lithuania’s Ruklamilitary camp, I was also the communication advisor for the French combined tactical company-size task force (Sous-Groupement Tactique Interarmes, SGTIA).This operational component was composed of a 300-strong Leclerc tanksand infantry platoons backed up by a national support element. During this mission, my objectives were to highlight and showcase the joint exercises involving NATO allies which illustrates the interoperability between the participating nationsincluding French armed forces. Together, with my press officer and camera team, we shotthree months’ worth of daily photo essays and wrote up short reports depicting the SGTIA’s operational activities to promote awareness of France’s ongoing commitment alongside NATO allies in Lithuania. Articles and accompanying photos werepublishedonthe Ministry of Armed Forces website (article) and featured on the dedicated social mediapages.
Our Northern European tour of duty also gaveme theopportunity to work with a large variety of military and diplomatic bodies not affiliated with the Battlegroup. Once every two weeks, I took part in meetings hosted by the NATO Force Integration Unit (NFIU) in Vilnius, overseen by a Portuguese senior officer aimed at coordinating communication actions between all NATO actors with our Lithuanian peers. On these occasions, I once met British officers managing the communication cell of the Baltic Air Policing (BAP) mission based in Siauliai.Together, we decided to setup an outreach campaign to honor troops of different nationalities serving on NATO missions in Lithuania, including three French servicemembers from our detachment and a Lithuanian officer from Host Nation Support.The British Embassy holds a seminar-panel discussion on the theme “what makes us stronger?” in which military personnel wasinvited to share and reflect on what military service means.
The relation with the Embassy of France in Vilnius was also crucial. We received Her Excellency the French Ambassador as she came to Ruklafor an official visit. The local press was invited to cover the event. Finally, avisit by the French and Lithuanian Presidentsin the military camp provided opportunities to strengthen our relation with the Lithuanian Ministryof Defence’s Communication Office. This event, which was one of the highlights of my tour, displayed our ability to pull our efforts together with our German and Lithuanian partners. Indeed, we coordinated all communications actions hands in hands.
After three months on the job in Lithuania, I can proudly say that my experience over the course of this operational assignment has truly been enriching, both professionally and personally. The range of missions, personalities, encounters, and projects planned made my Baltic stay a captivating experience. I am now involved in a German-commanded NATO mission on the European continent which gives me a deeper meaning to my service as public affairs officer at EUROCORPS, a multinational headquarters for the benefit of NATO and theEU. 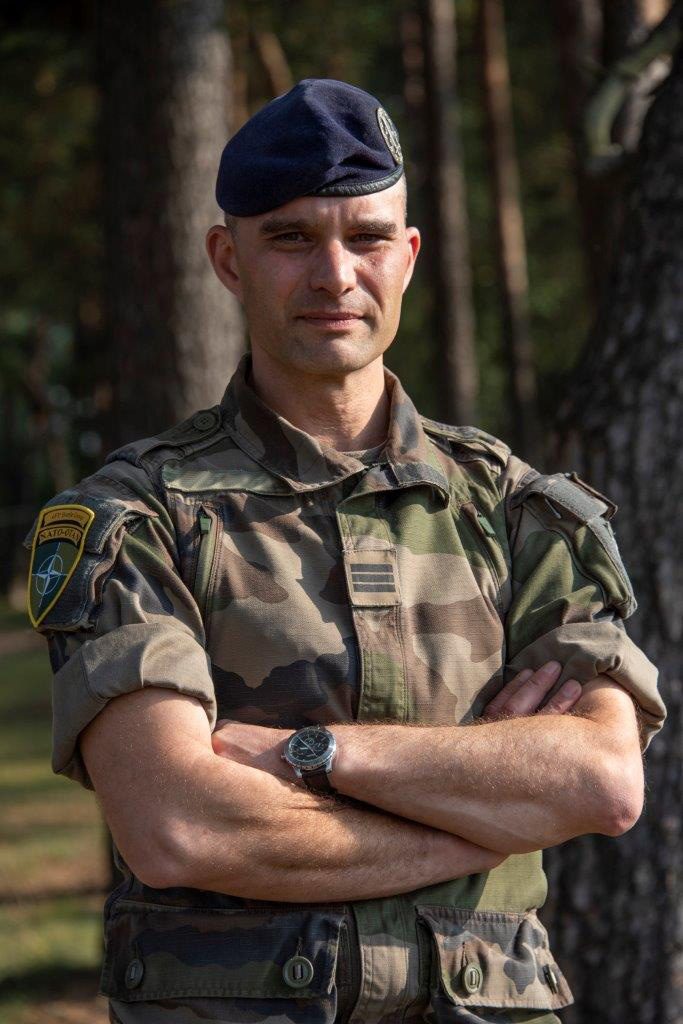