EXERCISE BLUE GABRIEL 21: “CIS, at the heart of any operation”

HomeNews2021EXERCISE BLUE GABRIEL 21: “CIS, at the heart of any operation”

From 22 to 26 March 2021, Eurocorps conducted an exercise at its Aubert de Vincelles barracks in Strasbourg, dedicated to maintaining and developing expertise in the field of signals. The exercise is called BLUE GABRIEL 21, “Blue” being the color of the Signals Corps in France and “Gabriel” its patron saint. The main objectives of this exercise were to test the ability to set up SIA (Système d’Information des Armées, military information system), Headquarters Eurocorps’ new information and communication system hardware, and to practice on the NATO Command and Control software, LC2IS (Land C2 Information System).

An exercise to maintain the skills of the CISCOY soldiers, at the core of Eurocorps’ CIS.

Directly subordinated to the Multinational Command Support Brigade, the CISCOY is a company of 90 soldiers specialized in information and communication systems and dedicated to their implementation and operation in support of the Eurocorps Staff. The CISCOY’s first mission was to get their bearings technically on the new French SIA equipment, recently delivered to Eurocorps, and which will eventually replace the SICF system currently used for the command and control of the multinational staff’s operations. Their second mission was to set up a server enabling use of the NATO LC2IS software. They deployed a training platform within the Aubert de Vincelles barracks, capable of training all headquarters personnel on the new LC2IS operational information system.

The more modern SIA system indeed offers much greater software hosting capacity, with the advantage of being able “to eventually, without any major technical issues, host all the functional applications required for the JHQ24 period”, explains LTC Éric M., reservist and deputy chief of the S6 brigade and coordinator of Exercise BLUE GABRIEL 21.

Mastering the necessary skills for operational preparation in 2022 and 2023 and the NATO Joint Task Force standby phase in 2024.

Eurocorps has started into the preparation phase of the Joint Task Force Concept with a view to assuming standby as NATO Joint Headquarters in 2024. To this end, signals remain an essential Eurocorps capability that must be continuously maintained. Eurocorps must be able to connect all subordinate units under its command to each other and to its command post in the event of a NATO JHQ deployment. The multinational staff “must be equipped with internal information systems enabling it to carry out this mission,” insists LTC Éric M. “With the annual rotations, it is essential to regularly maintain and even develop this technical expertise within our staff, whether for CISCOY specialists or for administrators of functional services in all the branches ».

“The stocktaking and breaking in of new hardware is an unseen but important step because it needs to be listed and identified on national and NATO catalogs”. Four functional services were tested on the SIA platform during the exercise: LOGWATCH, TOPFAST, JOCWATCH and INTELFS. Eventually, Eurocorps will have to implement 18 of them for the JHQ24 standby phase. Thus, it was necessary to test the latest versions according to the baseline defined annually for the NATO command posts. BLUE GABRIEL was also an opportunity for the officers who manage this software within each branch to practice on the new versions and to drill their knowledge of functional desktop systems.

About forty French, Spanish, German, Belgian and Polish soldiers were involved in the design, coordination and execution of this exercise.

G6 played an early role in designing the exercise. The G6 Planning Cell developed the “CIS concept”, the doctrine for the operation and use of CIS for Eurocorps. This means “developing a concept for the exercise that defines what we want to do, when, how, and the framework for using these systems”, explains LTC Eric M. The Multinational Command Support Brigade, and more specifically S6, thereafter becomes involved in the coordination and implementation of the exercise, defining the technical annexes to allow the CIS COY soldiers to implement it on the ground.

The next exercise, scheduled for 2022, is the aptly named COMMON GABRIEL, or COGA 2022. Eurocorps will implement a wide spectrum of CIS-related skills required for its future NATO JHQ 24 mission, ranging from information systems to means of communication (such as satellites, LOS, and fiber optics). This large-scale exercise will include, in addition to the application of the LC2IS command software on the SIA boxes and the testing of functional services, the deployment of signals elements and associated operators by Eurocorps’ framework nations over the span of two weeks. There are still a few months left for our CIS personnel and branch administrators to become familiar with this new hardware and software! 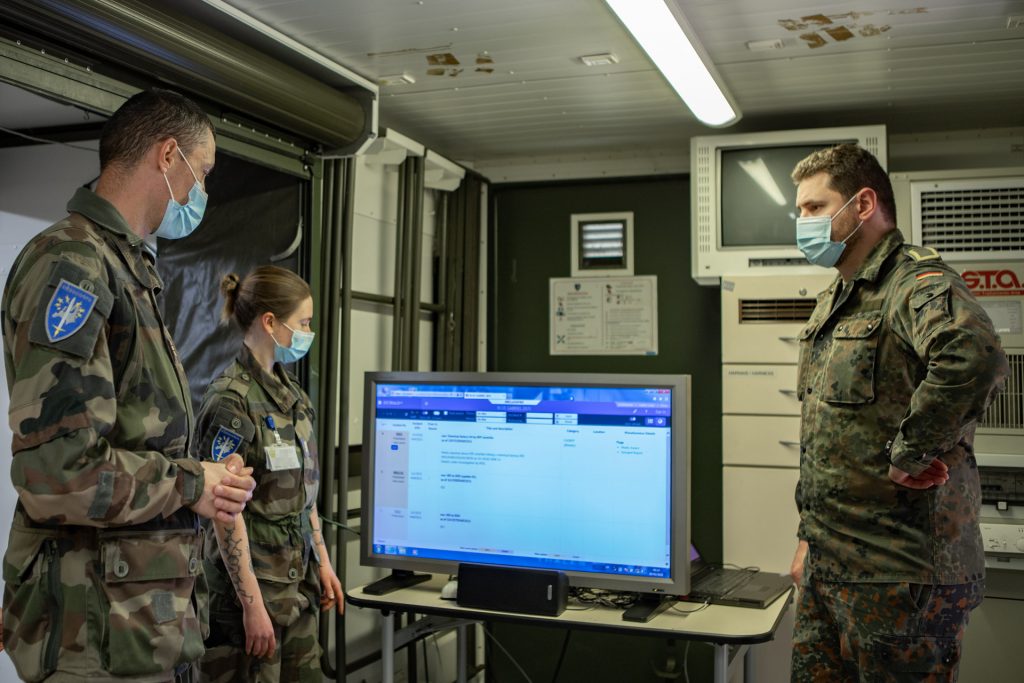