EXERCISE AUSTERLITZ 2022: Learning from Historical Battles to be Prepared for the Military Challenges of Tomorrow!

HomeNews2022EXERCISE AUSTERLITZ 2022: Learning from Historical Battles to be Prepared for the Military Challenges of Tomorrow! 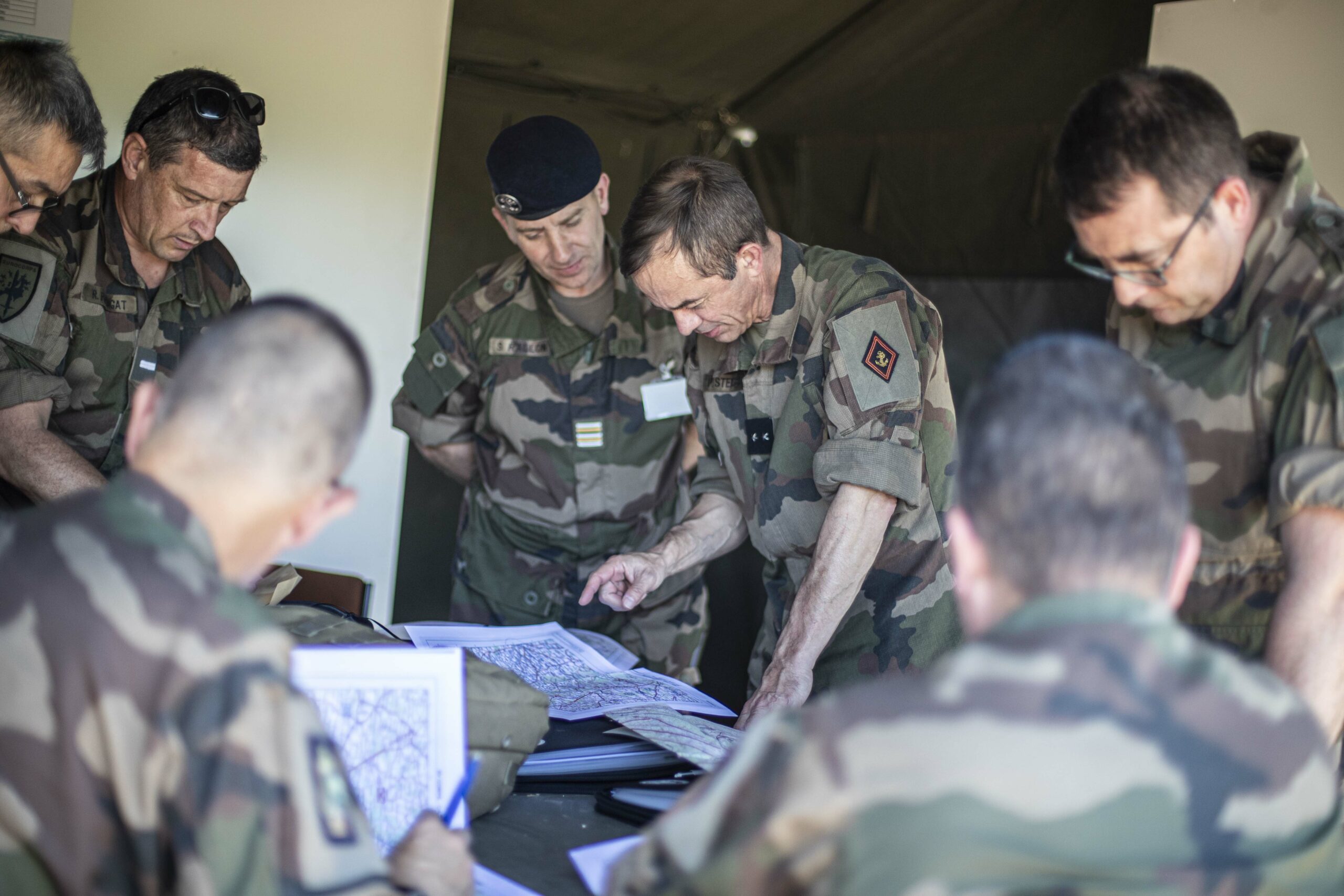 Austerlitz is the codename assigned to the military exercise conducted jointly by the French Army and Eurocorps. There is an old military wisdom that says: Everything that is not trained regularly does not work. This makes it all the more important that around 30 French generals, together with comrades from other nations, spend two days (18th and 19th May) exchanging their experiences on the basis of historical tactical situations of Alsace campaign World War II. The basic principles of tactics such as combat value, combat support and logistics are still valid today.

The first step with the historical and theory sessions of the 2022 exercise were held in the Aubert de Vincelles barracks in Strasbourg on the morning of 18 May. This was followed by a practical part  at the Dabo rock site and the following day at the citadel abutting the town of Bitche. In this way, the participants had immediate insight into the relief and the terrain itself. This on-location study centered on the battles fought during the liberation of Alsace in late 1944 and early 1945, providing division, combined arms brigade, specialized brigade commanders and training school commandants with a refresher course on high-intensity warfare at army corps level. In addition to the analysis and development of maneuvers and the attendant processes, the study sessions enabled the audience to familiarize themselves with the specificities of this level of command, which lies at the junction of the tactical and operational levels, extending even to the political level in specific cases. It was the XV Corps of the U.S. Army launched the November 1944 assault on Strasbourg, in which General Leclerc’s 2nd Battalion took part. Participants also analyzed the attacked mounted by the German LXXXX Infantry Feldkorps, part of Operation Northwind, in January 1945.

Beyond military and political considerations, special attention was devoted to the human and psychological faculties called for in military leaders, confronted with the constraints, risks and decisions encountered in battle, and whose individual traits of character, personal and professional experience, and the bonds and ties forged with their peers over the course of their careers and in ongoing operations must be taken into account. The objective was to show that at these levels of command, mastery of operational processes, while essential, is not the only factor in an often-difficult decision-making process. For Lieutenant-General Peter Devogelaere, the Eurocorps commander and mentor for the exercise, Austerlitz 2022 “is a very rich exercise and not only for our french counterpart for which we conduct this exercise but also for Eurocorps”. Internal objectives have been reached by this exercise and “The two examples we have studied, where we address specifically the corps level, has been the main focus for the 2 days is very interesting for us”. For the commander “to exchange with a lot of different brigadier and division level and support troops from the French side, and to discuss with them all these topics is enriching for all of us”.

For EUROCORPS, this exercise entailed a great deal of preparation both in organizing the staff ride and for the logistical support needed to host generals and conduct the exercise itself, which lasted two days. In addition to the high quality of the “tactical dilemmas” proposed by the Eurocorps animation team, Lieutenant General Vincent Guionie, Land Forces Commander, praised the “remarkable organization and support” provided by all the staff from the Multinational Support Brigade of Eurocorps. Backed by its experience setting up command posts on all types of terrain, soldiers successfully rose to the challenge. This is especially true as Eurocorps is currently in its preparatory phase as Joint Task Force Headquarters for NATO in 2024 and will start its exercise series from October 2022 on. 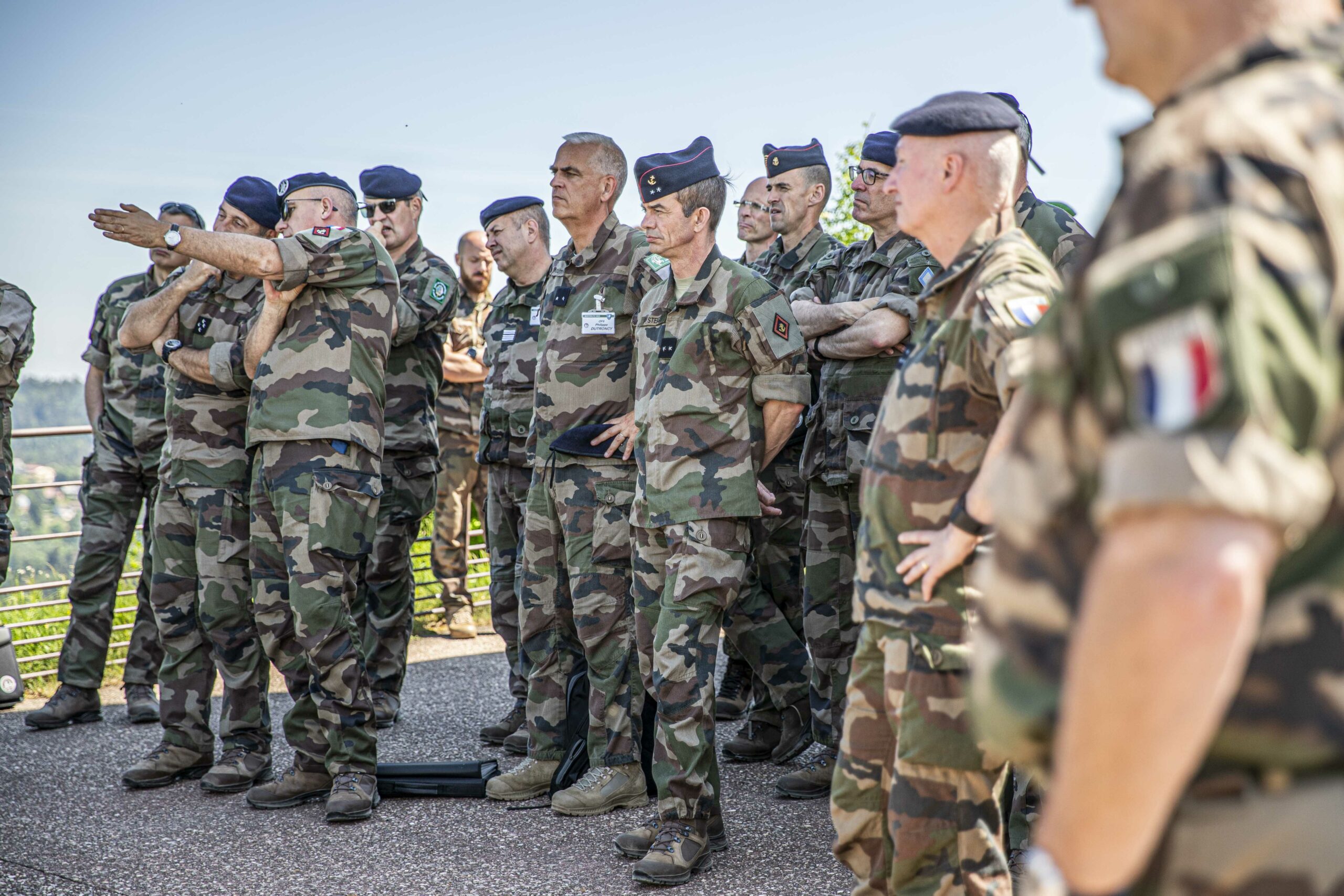 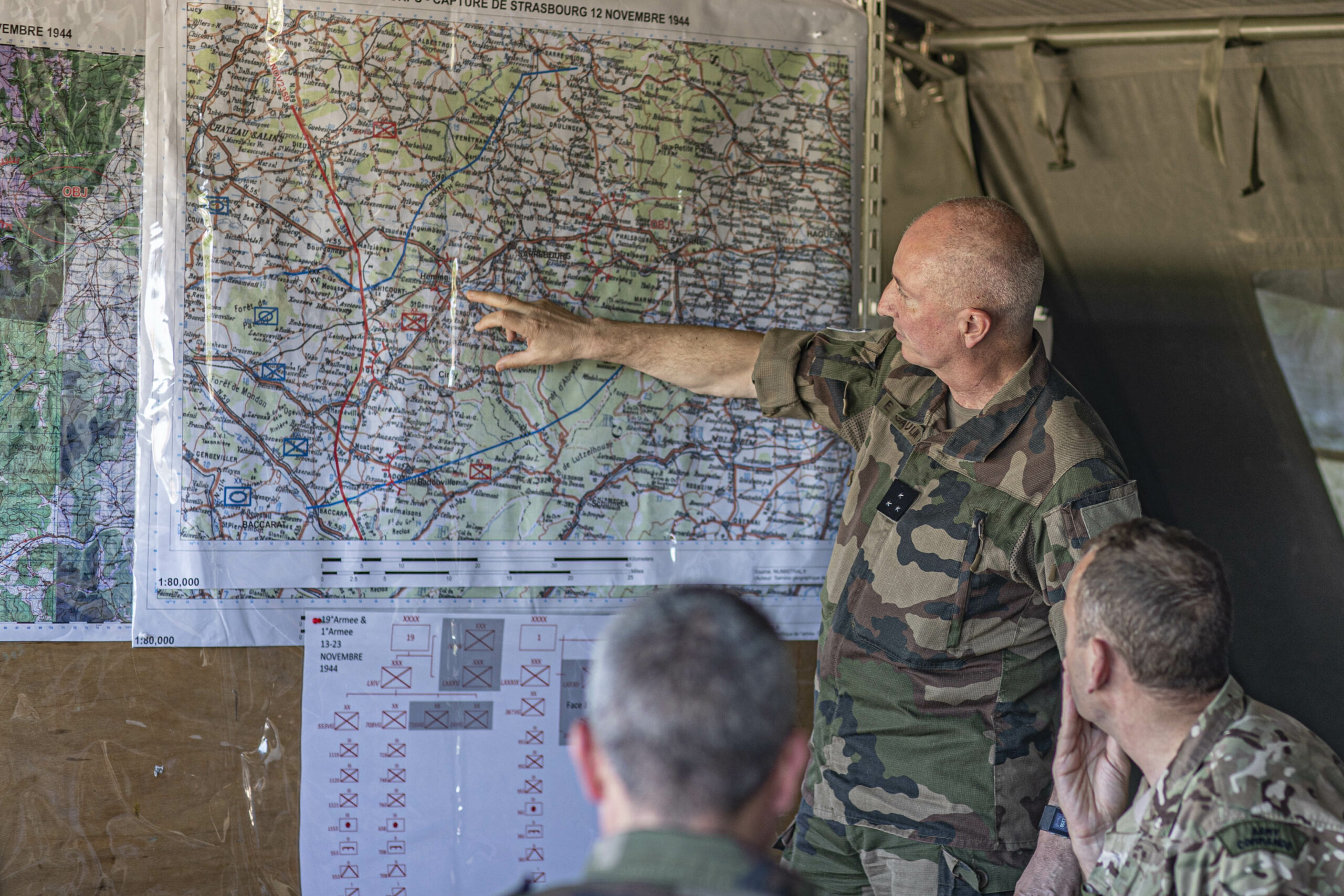 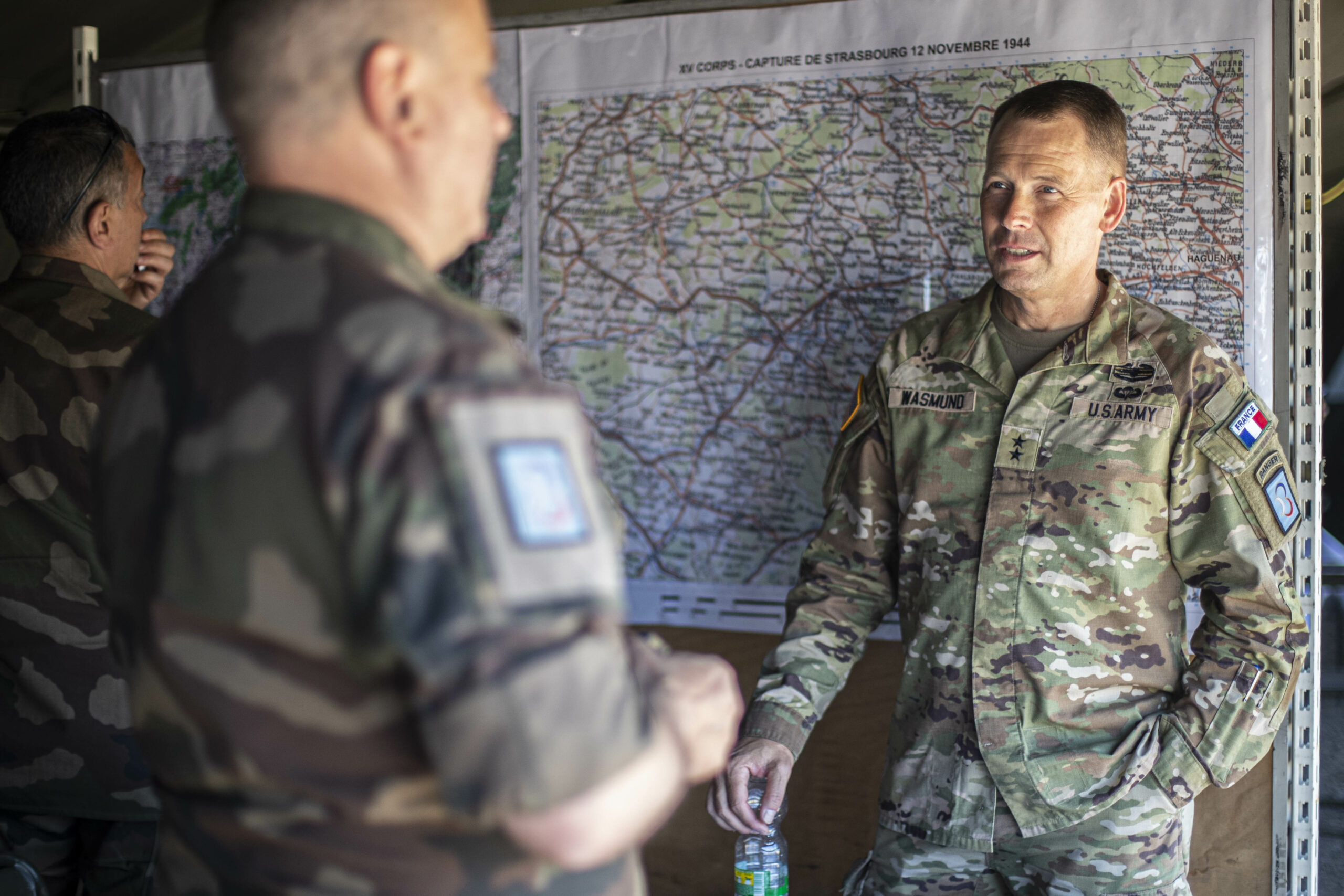 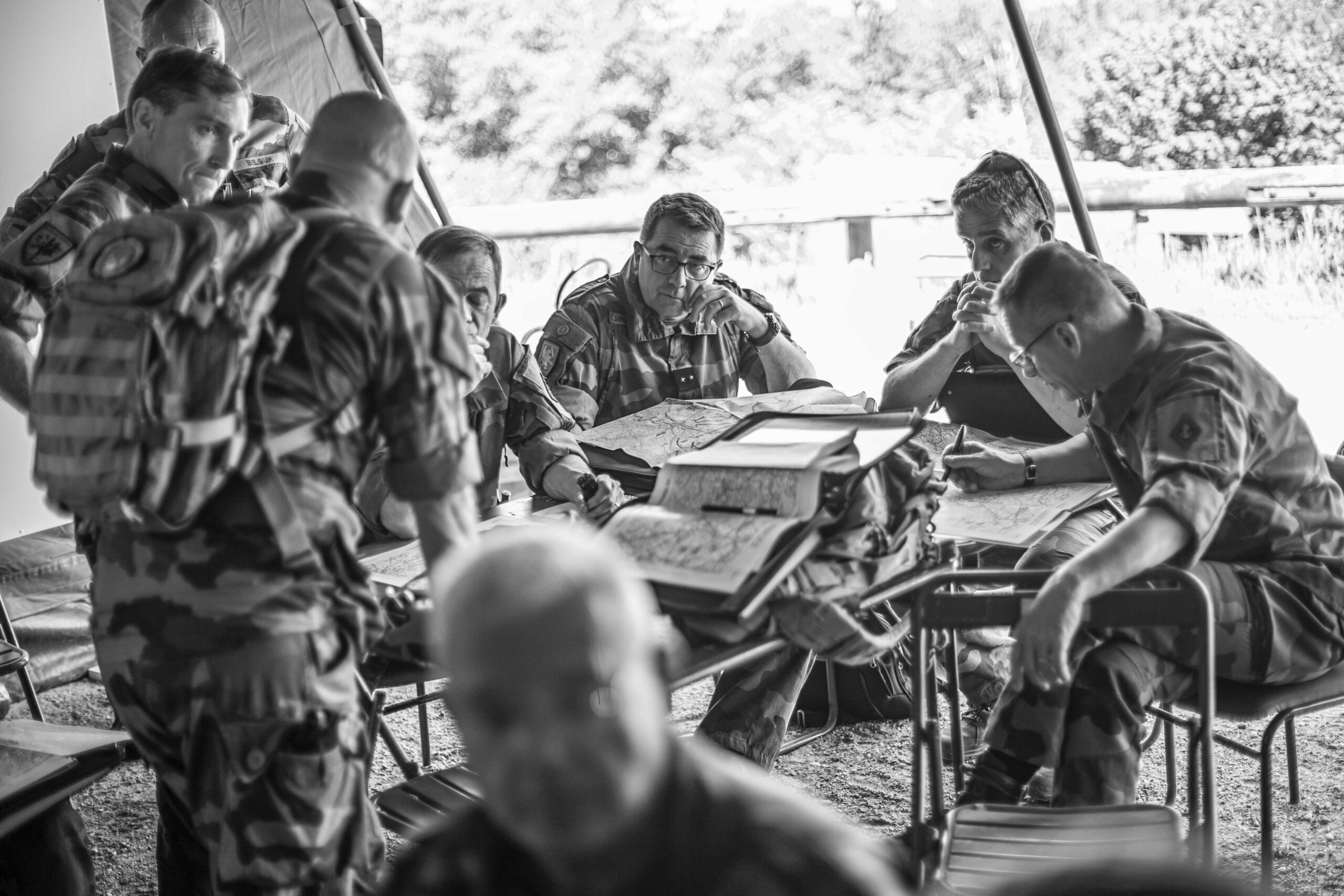 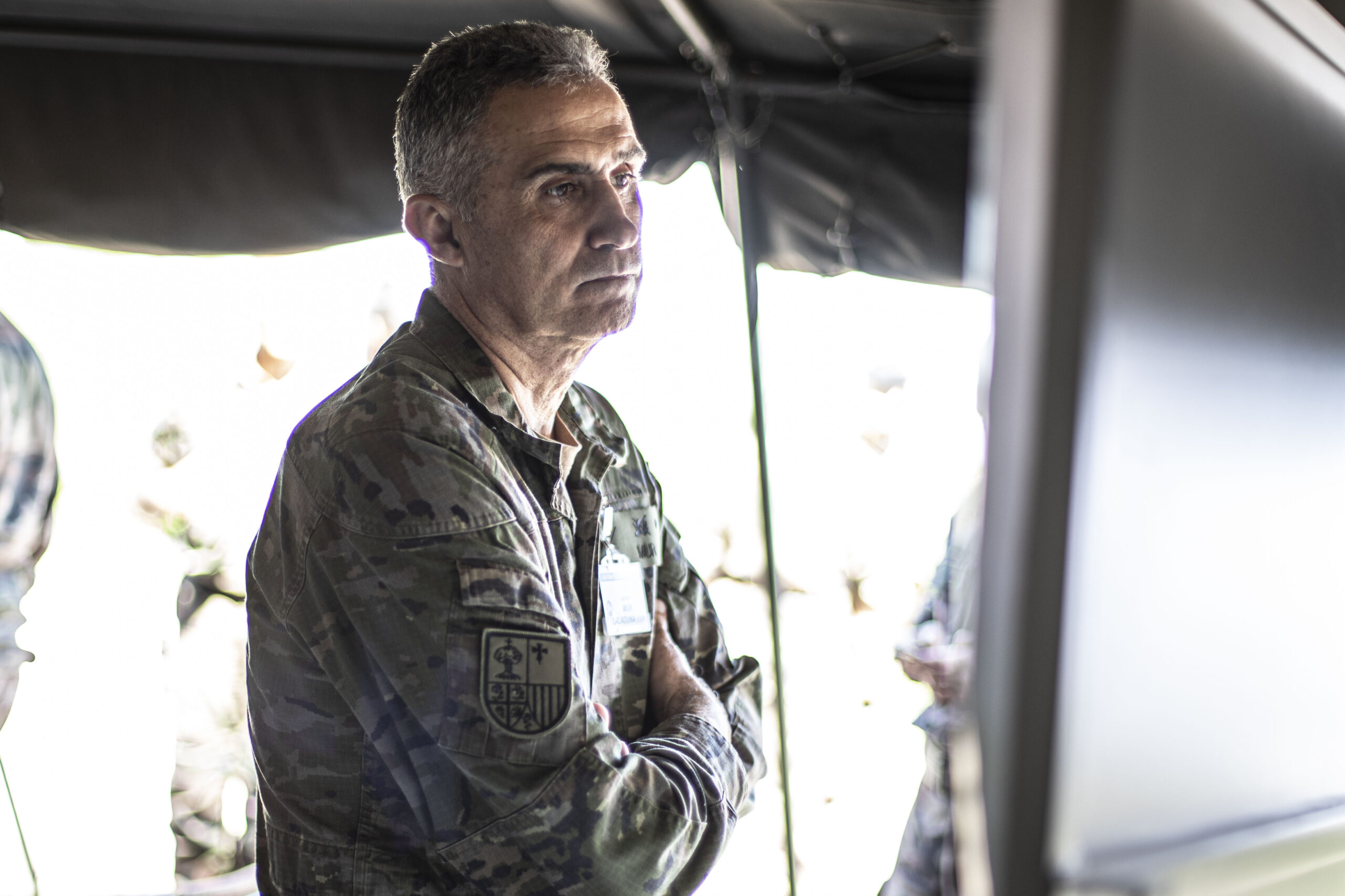 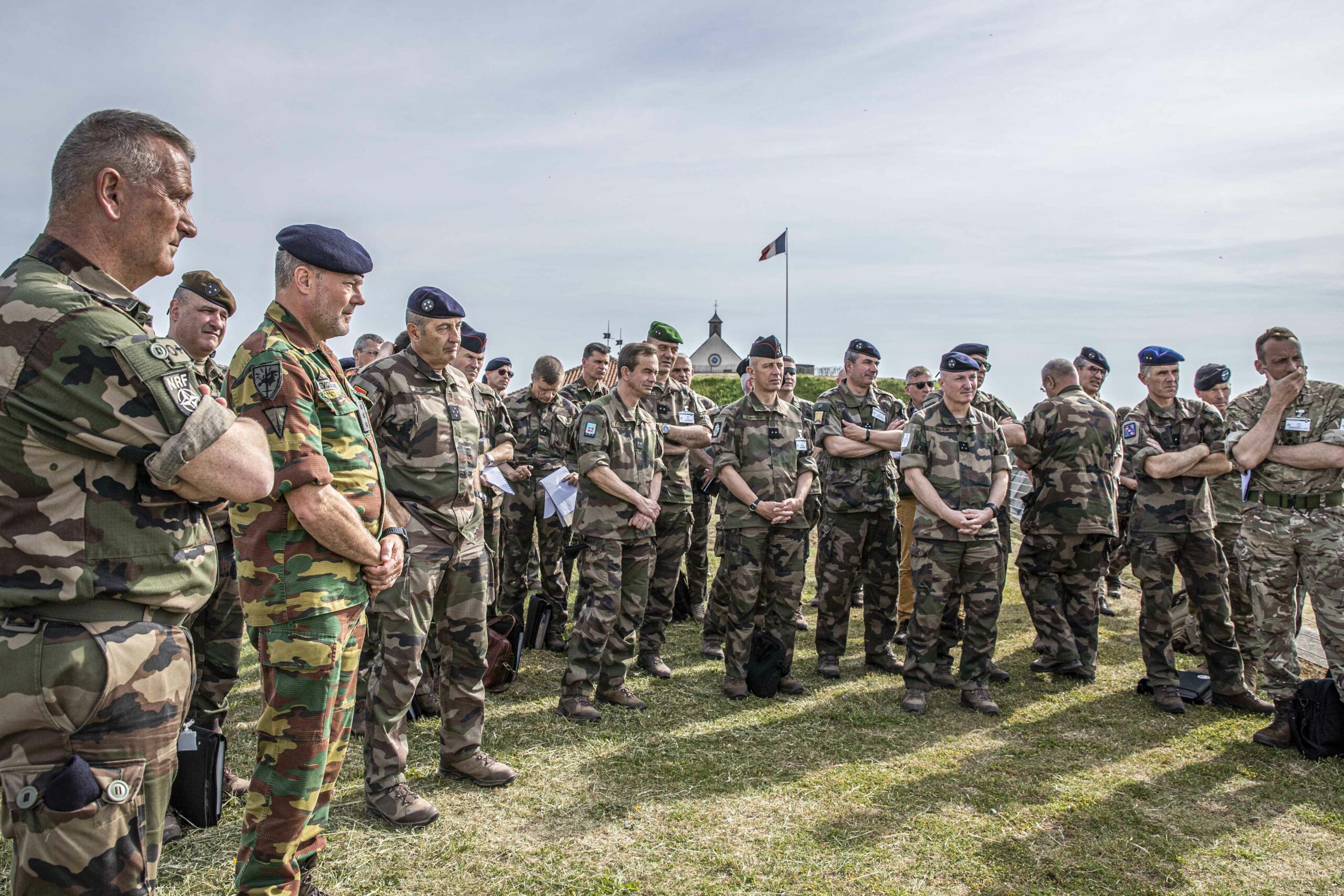 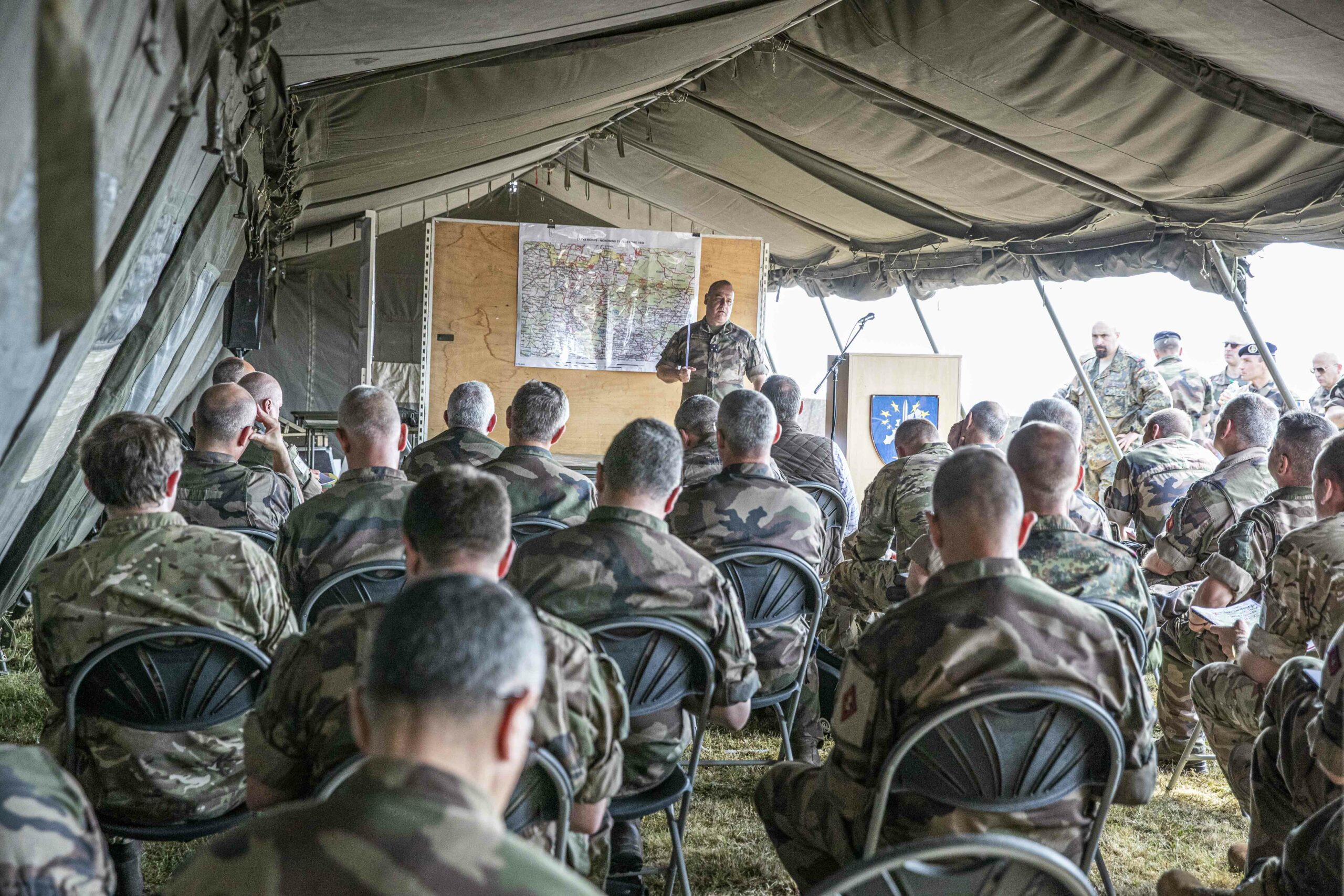 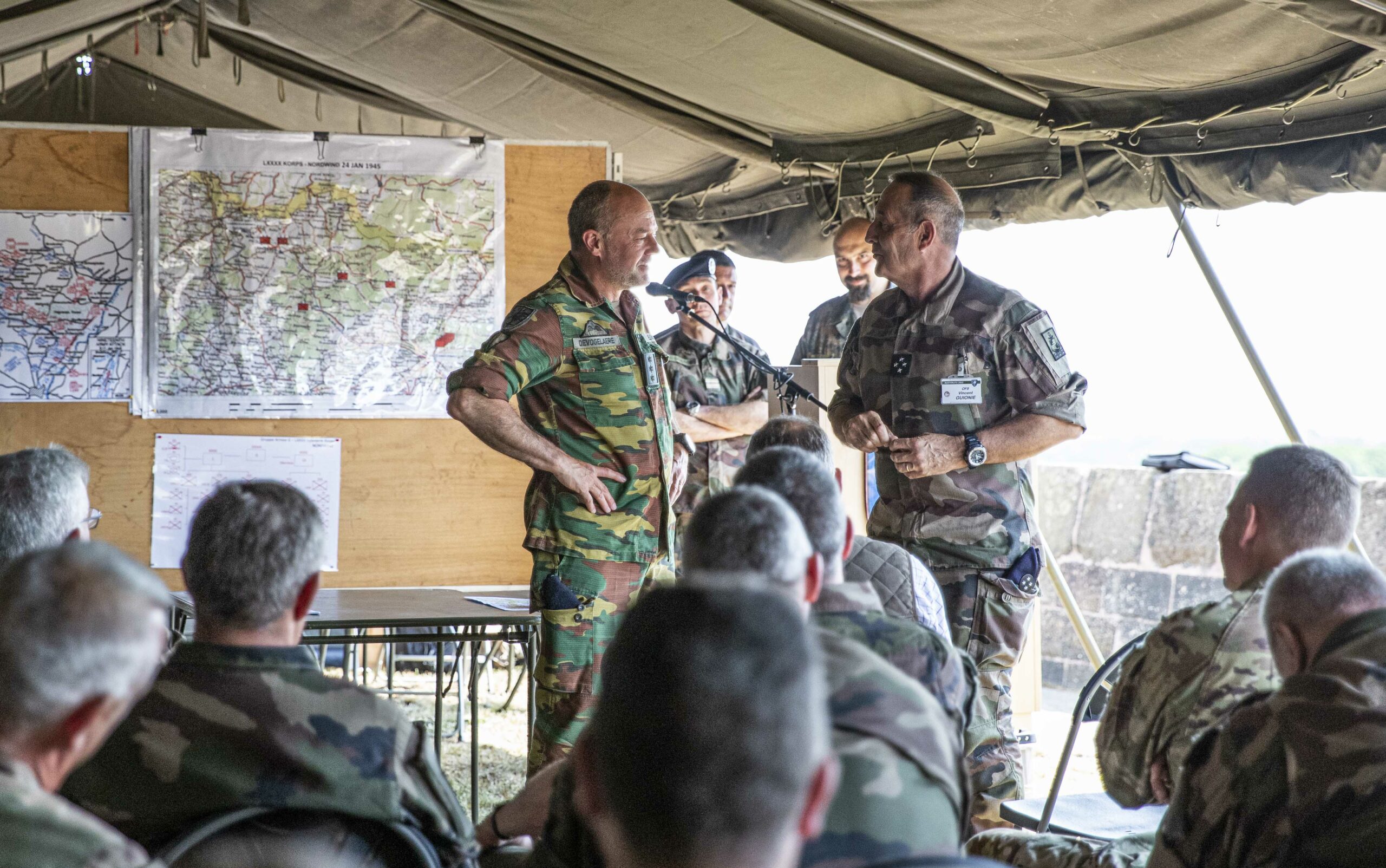 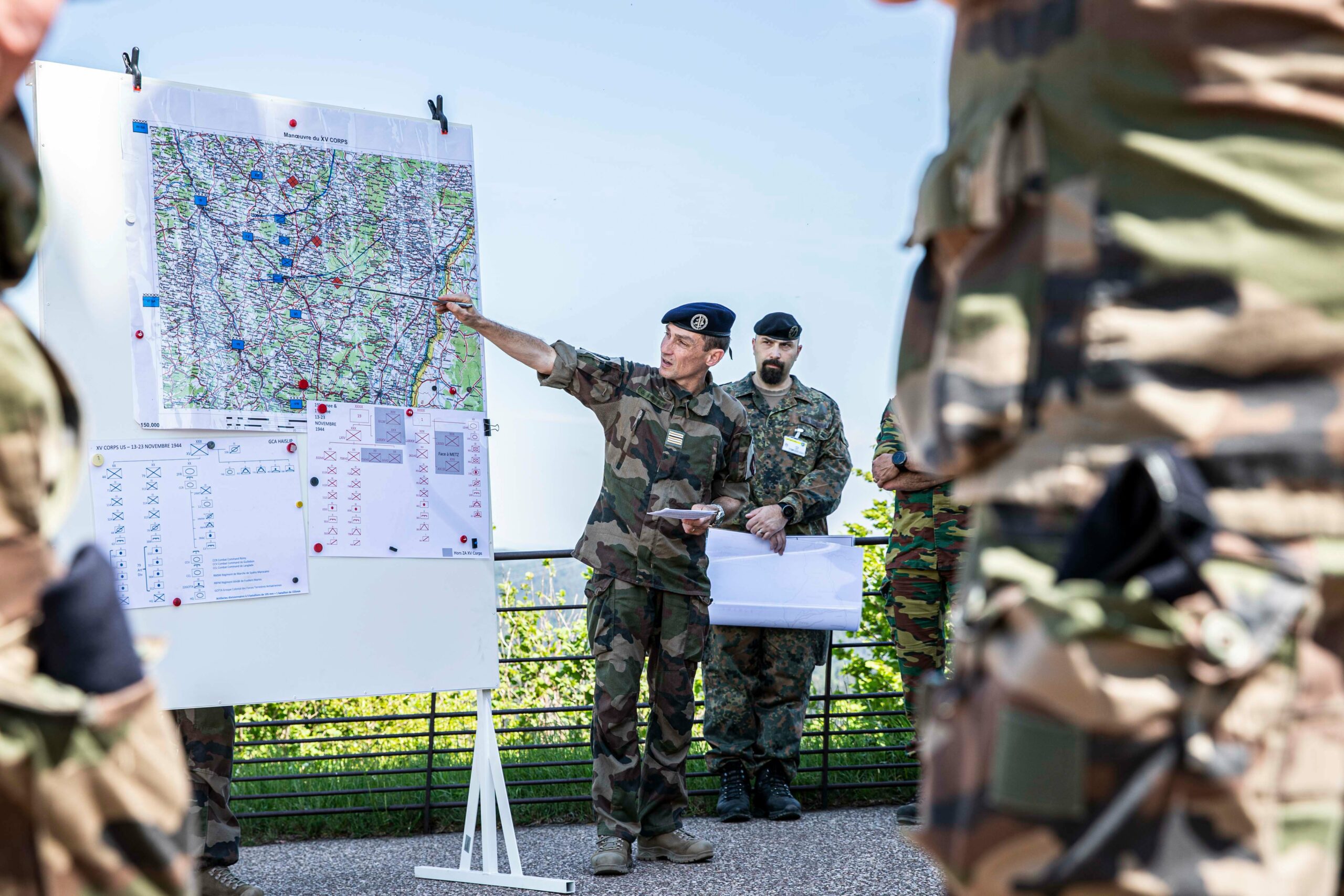 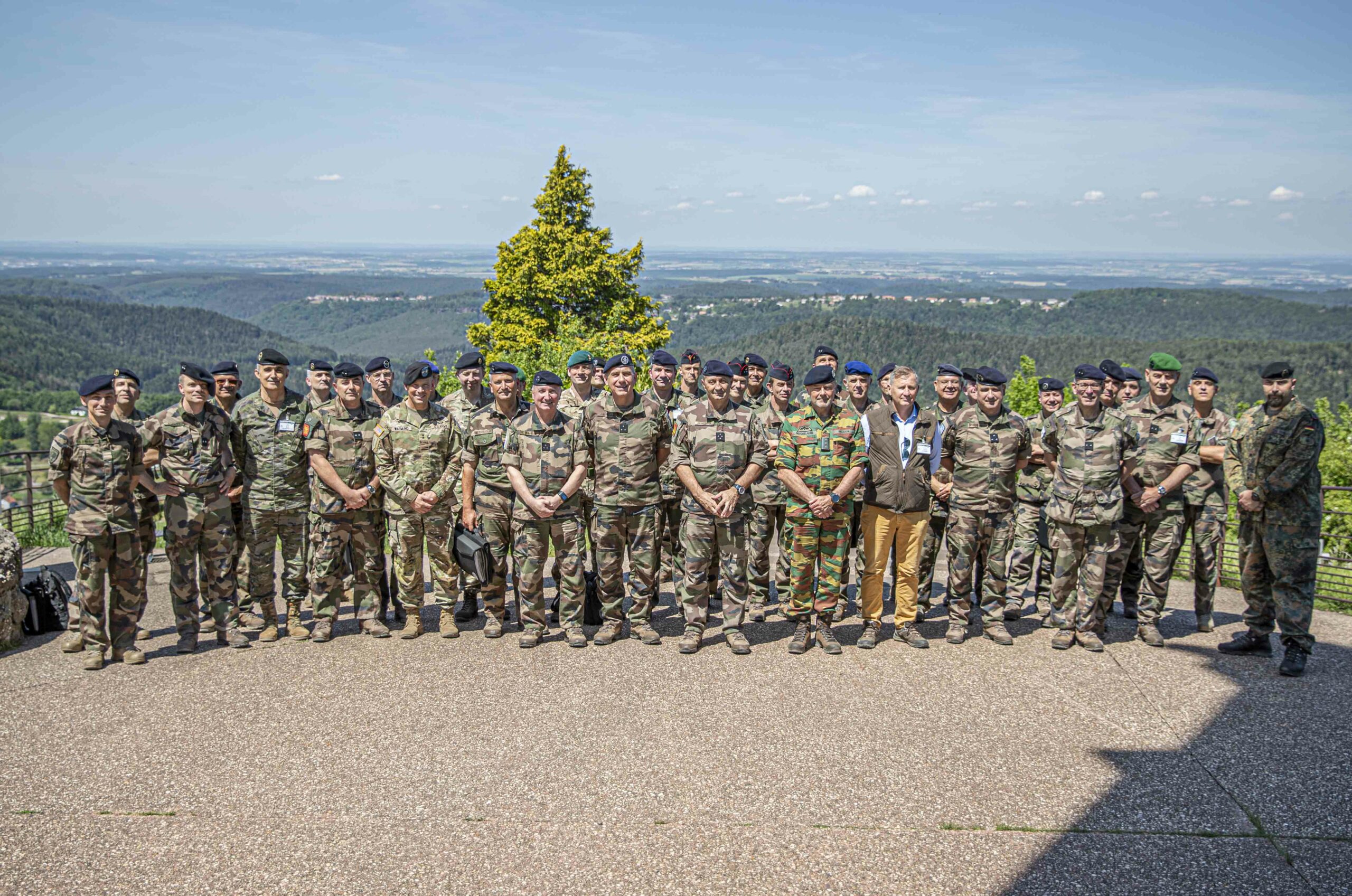